ABC Wednesday is a word meme with participants from around the world. This fabulous meme was created and hosted by Mrs. Denise Nesbitt who hails from Great Britain. Over time, others have joined in to help host this wonderful and informative meme. We are now in our seventh round-some of the participants have been with this from the very first round; others have joined in along the way. Each week we are taken across the globe to see the varied and exciting contributions people have taken the time to discover and capture. We start with the letter, "A" and each week we post something in regards to the next letter of the alphabet. This week's letter is, "M". 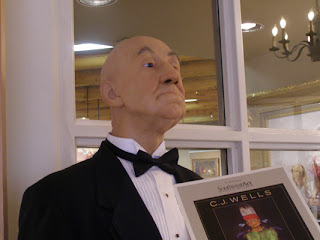 Don't you just love a mannequin with attitude. You know, I would've sworn when I took this picture that it was a real mannequin. Now that I look at the image for this post, I'm starting to think that the mannequin was a 'fake' mannequin and a real human being! 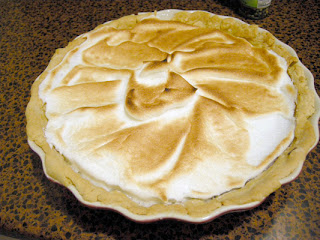 Mmmmm, good! Meringue pie. One I made for I think our Christmas dinner. I'm getting hungry just looking at this! It was a chocolate pudding pie. 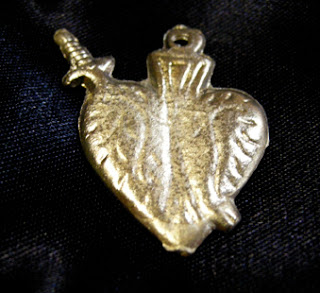 Milagros are very popular here in New Mexico (being as their origin is from Mexico). I haven't done a good job of collecting them-this might be the only one I own.. Milagro means, "little miracle". We could all use a stash of those, couldn't we? Lots of images can be seen here of Milagros. 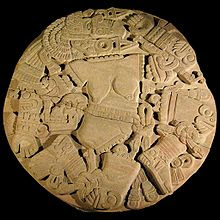 The Aztec Moon Goddess is called, Coyolxauhqui (and no, I can almost never pronounce anything that's Aztec!).

Here's the exert from Wikipedia on how Coyolxauhqui became the moon goddess:

"The pregnancy of Coatlicue, the maternal Earth deity, made her other children embarrassed, including her oldest daughter, Coyolxauhqui. As she swept the temple, a few hummingbird feathers fell into her bosom. Coatlicue’s fetus, Huitzilopochtli, sprang from her womb in full war armor and killed Coyolxauhqui, along with her 400 brothers and sisters. He cut off her limbs, then tossed her head into the sky where it became the moon, so that his mother would be comforted in seeing her daughter in the sky every night."

As you read this post, I will be in the "way over yonder" at the Petrified Forest National Park. Out in the middle of nowhere and limited internet (I have to drive over to the visitor's center to pick up the wi-fi). Leaving comments at your sites will be nearly impossible, but I do hope you come by and visit my site and leave comments (assuming I can get my link up on ABC Weds). I've done these posts ahead of time and scheduled them to appear when we do our weekly posts.

Email ThisBlogThis!Share to TwitterShare to FacebookShare to Pinterest
Labels: ABC Wednesday Round 7

Love your choice of M's today. The pie looks too, too yummy and your mannequin is outstanding. Have a wonderful trip out in no man's land.

Great post,photos and choices for the M Day, as always, Paula. I love the "mannequin" or "real man"! What a fun shot! Hope your week is going well! Enjoy!

Great M's - and I do think that whatever - man or mannequin, - the attitude is certainly there!

LoL at the human mannequin.. what a serious pose! :) and delicious meringue too :D nice one, MG!

The mannequin is a bit freaky, because I can't see whether he is real or fake. And I had to skim over the cake, it looked too yummy.

The idea of collecting milagros fascinates me! Great collection of Ms.

Sometimes the only difference between a mannequin and a butler is breath. :) These are delightful pictures but the pie takes the cake - my very favorite brand and you obviously have made real merinque - it's fantastically beautemous and I am filled with envy!

aMAZING mannequin; thought he was real! And lemon merigue pie is my favorite among those I seldom actually eat.

Man, I hope my boobs never sink that low! lol

Your comment about the mannequin made me laugh out loud, Paula. My husband thought I was nuts. (But he thinks that most of the time anyway.)

And the meringue on that pie made me hungry. Now I have to find food.

Jay at The Depp Effect said...

I had my last three ABCs scheduled while I was in Italy - it's a great way to keep things moving! Well done!

Interesting post - I love the mannequin. He certainly does have attitude, doesn't he? And the story about the Aztec goddess (who's name I am not even going to attempt) is fascinating. What a very warlike people they must have been!

Wonderful choice of M-words, Mannequin, moongoddess... and great images to go with them!

When you return from the Petrified Forest stop by my cat Sara's M-post. I know she would be thrilled to have you visit!
Sara Cat's abcWED-round-7-M


Copyright 2006-2022. Copyright of photos, art and content is retained solely (unless otherwise credited and indicated as belonging to someone else) by the author of this blog. Artworks are copyright their respective artists and/or museums and and remain the intellectual property of the respective artists and/or museums. Please email me for re-use permission of my work.