Chaco Rising and the Summer Solstice 2011 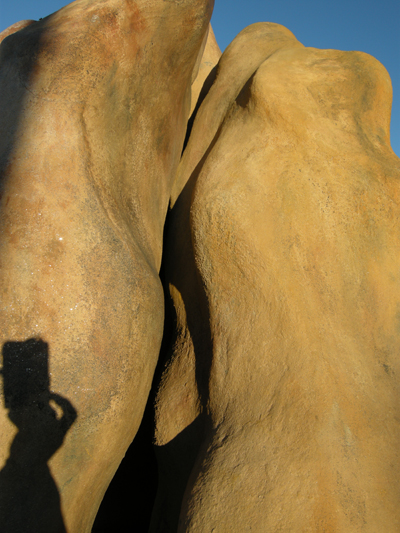 That's my hand in the left corner holding my trusty point and shoot camera (Nikon Cool Pix P5100). I am right outside Rio Rancho's City Hall standing in front of one of the city's first piece of public art. You see, our city is only 30 years young. We don't go way back and we don't have old anythings. Which is kind of sad if you like old buildings and architecture (yes I do). But, the exciting part is that as a citizen, you have a chance to 'build a city'. Really.

The sculpture is a tribute to Chaco Canyon which is not too far from our city as the crow flies.  What Chaco is known for is that it is a huge marker of astronomical events built by the ancients several hundreds of years ago. Huge in every sense of the word-the amount of area it covers geographically and the time span or years of cycles it marks. If you've never heard of it, read up on it. Phenomenal! Lots more images here at this link. And a video we did back in 2009 on You Tube.

Artist, Jaymes Dudding built this sculpture and followed suite with the ancients before us and created it so that it too, would mark the summer solstice (and winter too). On the morning of the solstice, a shaft of light enters the inner chamber of the sculpture and travels across a dichroic glass spiral of the universe that his wife, Pat, made for the sculpture. As it passes through the center, the shafts of light converges into one light dagger. It separates again after passing through the middle.

There was only three of us there to witness it this year. What a shame!!! I don't understand how the media can spend two days on a what was deemed as the lead story about a dog killed by his owner's golf ball but not something like this.There should be a mob of people to witness this as I think it is an amazing feat that Jaymes was able to execute his concept so successfully.


So, if you live in Rio Rancho or the neighboring metro area, mark your calendars for next year. We'll all go out for breakfast burritos with green chili in it afterwards! 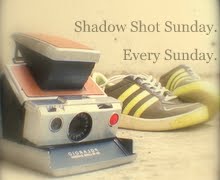 "Everything that we see is a shadow cast by that which we do not see." (Martin Luther King)

Every week, a group of us from around the world post our shadow shots over at Hey Harriet. Entertain your muse and be amused by stopping by to see what others have posted! You can view all of my 2010 Shadow Shot Sunday images on my Flickr account. Click here to view them.
Posted by Paula Scott Molokai Girl Studio at Saturday, June 25, 2011

I fear the media dwells on what people seem to be interested in. The media could do so much better! I'm glad you at least knew about it and witnessed it, though.

This was SOOOooo cool!! You did a great job of capturing it too. The news media folk seem to be in their own little imaginary world really. Don't get me started. You should probably start your own station,KKMG! Whatcha think?! Happy SSS.

Oh, don't get me started on the media either -- between them and the politicians it is easy to ruin a day! This is such a terrific capture, Paula! I love it! Hope you have a great weekend!

well I'm in agreement with previous commmenters. I'm intrigued by this story. great great shot too. happy SSS, and I hope you have a really fun weekend.

this is amazing! i found myself holding my breath as i watched your flickr series. wow. fabulous!!

No matter how young your town is, the age is irrelevant to art - art that adds character to this lovely town on the Front Range. Anything that is exhibited locally needs to be enjoyed, not studied. Your shadow is of the diligent artist capturing the art, and nicely becoming part of that piece. Yours is a neat town, full of character - and cool artists!

No matter how young your town is, the age is irrelevant to art - art that adds character to this lovely town on the Front Range. Anything that is exhibited locally needs to be enjoyed, not studied. Your shadow is of the diligent artist capturing the art, and nicely becoming part of that piece. Yours is a neat town, full of character - and cool artists!

What a wonderfully well conceived and executed sculpture! Looking at your first shot without knowing what it was, I thought it was the back end or rising cow and thought what a clever shot.
A great series showing the perfection of the project to capture the very moment of the solstice but admit it, with 200 people there you could not have got those perfect shots.

This is the best Paula!!! I'll be there next year. Does anything happen on the Winter solstice? I studied the lead photo long and hard before I started reading. I thought it to be someone carrying a large parcel or something on their head, balancing with their arm. When I read it was your hand, I can see your finger on the shutter with the camera held horizontal. Cool effect either way.
Really, I want to come and see that. It IS a shame that more people didn't show up and have an interest. And worse that the news media chooses to sell news rather than report it.
See you in September for sure.

it is sad that more people weren't there...it sounds like an amazing sculpture.

How COOL!!! Love that and the burritos sound good too ;)

mmmmmmm.....summer solstice @ your place next year sounds fantastic!! Loved your (and I do mean YOUR) video about the sculpture - love it - and the glass piece was amazing! What a shame more people didn't show up this year!
Yes, you should try some rhubarb...it's delish - and yes, we had loads of lavender food last week - what a fun day!
Have a great week Paula!