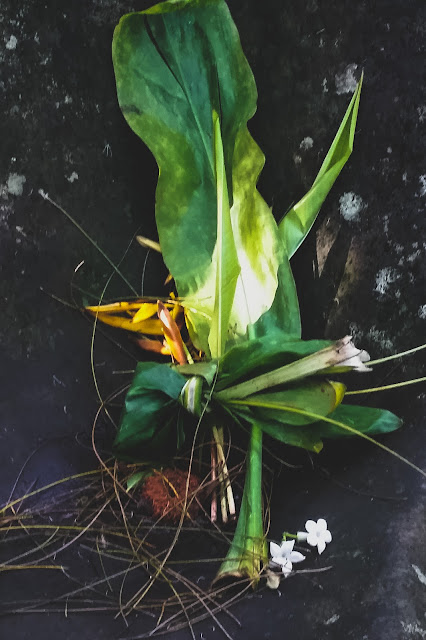 Ho'okupu is a Hawaiian tradition and is in practice today just as much as it had been in days gone by. In a nutshell, they are offerings given freely as an expression of gratitude, respect, and aloha. These offerings can be manifested in many ways. Food wrapped in a ti-leaf bundle is very common. It isn't that the expectation is that one would eat what is in the offering-it is often a symbolic gesture-one will find these offerings in many locations. I often see them in the park that I take walks in-up at a sacred rock called the Phallic Rock. It is an ancient Hawaiian fertility rock. These kinds of offerings are very personal and one could not begin to second guess why that particular offering was made.

The Hawaiian culture is a very sharing and generous culture. Even though I am not of Hawaiian ancestry, this is my culture. For example-you never show up at someone's house empty handed-you bring along some food or gift to share or leave with your host.

The word, "ho'okupu" means, to generate growth-fostering a reciprocal relationship.

Join us as a group of us (yes-there are many of us!) from around the world post our shadow shots over at Shadow Shot Sunday 2. Entertain your muse and be amused by stopping by to see what others have posted!
Posted by Paula Scott Molokai Girl Studio at Saturday, October 22, 2016

We need to show gratitude - but the modern world moves so fast we lose sight of that. Happily, your culture in the 50th state remains as it has - which we mainlanders out to get back to...

Beautiful shot of a beautiful tradition!

This somehow reminds me of Tinkerbell. I have Peter Pan on my mind.