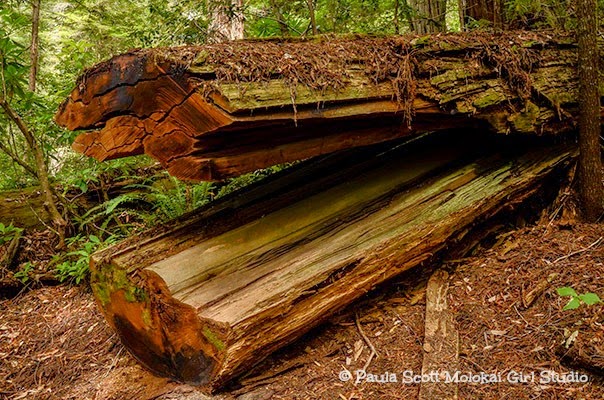 Indeed, it was an epic journey-traveling last week to the Eureka area to photograph the redwoods and all the beauty that belongs to the wilderness of Northern California. You see, 10 years ago, when I turned 50 years old, I decided to celebrate it by going somewhere on my own in lieu of a big party (or any sized party for that matter!). Instead, I did an art retreat at Hacienda Mosaico in Puerto Vallarta, Mexico. It was a life-changing decision for me as I had never traveled alone like that-let alone to another country. I absolutely loved it-I was taken care of of instead of taking care of others. I got to do art 24/7. Albuquerque artist, Juliana Coles headed up this special retreat called, Visual Journaling.

I know the math is easy for you on this one-fast forward ten years and I am about to turn 60 later on in October (I figure if I keep saying that number, it won't be such a shock or big deal when it happens as 30 and 40 were). I started planning and thinking a year ago what it was that I wanted to do to mark this new decade for me and then I realized that I had never seen the redwoods or even came close to it. I asked my good friend and fellow intrepid photographer, Linda Laitner if she would be interested in joining me. She is a worldly traveler and oddly enough, had never seen the redwoods or been to that area of California. We've done many trips together, so there was no 'unknown' as to how we'd get along. For her, it was a no-brainer decision with a resounding 'yes'! My husband had seen the redwoods when he was younger and for him, traveling with me when I have a camera in hand is no fun for him.

These images are from our first day out when we did the trail of the ancients-hiking down into a valley where the tallest trees live. Mind you, even standing at the bottom of the tree and looking up, you cannot see the top of the
tree-in fact, all you can see is the bottom third of it.

When we finally made it to the bottom of the trail (a little over a mile but it took us forever since we both were enthralled with recording everything in front of us with our cameras). I had stopped to switch out lenses to a wide angle lens and Linda and I typically do not stay completely together, but somehow manage to do things on our own without getting too separated. After I changed out lenses and got some shots in, I continued forward to catch up to her, but then got interrupted by seeing a man and a woman packing up their climbing gear. They looked like they just got down from a tree, so I stopped to talk to them-you know, like-"did you get all the way to the top?" in which the young man answered, 'no' and explained that the line he left from last year got broken by a neighboring tree that fell and broke the line he left from last year and he did not bring a bow with him to shoot a new line up so that they could not continue the climb to the top. Come to find out, they are both tree botanists from nearby Humboldt University and that he had been climbing  this particular tree since 1995. And that tree had grown 8 feet since then-presently at 374 feet, it went from being the 4th tallest tree in the world to the 3rd tallest tree in the world. Of course, in the midst of this conversation, I had to ask if they had permission to climb (not knowing if I should be seeking out authorities-which were nowhere to be found anyway). This particular tree had a name-the National Geographic tree. Back in the '60's when National Geographic was out there to photograph the tall trees, they realized how special and unique these trees were and raised the level the public level of awareness to the point of the area becoming a National Park and protected from the encroaching and damaging logging practices.  I'm sure that had it not been for National Geographic, it would've been all lost to the logging industry. In fact, should you visit these redwoods, know that what exists today is only about 3% of what used to be. Kind of staggering.

Later on, I Googled tree botanists from Humboldt and found out that the people I were talking too were-um, maybe rock stars in the research of redwoods. And featured on National Geographic TV. In fact, this person only gets to climb this tree once a year and I had the privilege of stumbling into him and his wife on that very day. Wow. What are the odds? They were so polite to answer my questions-little did they know that I was practicing restraint like you wouldn't believe. I had a slew of 'nerdy' questions I wanted to ask them (including their names). But, I didn't.


Join us as a group of us (yes-there are many of us!) from around the world post our shadow shots over at Shadow Shot Sunday 2. Entertain your muse and be amused by stopping by to see what others have posted!
Posted by Paula Scott Molokai Girl Studio at Saturday, September 27, 2014

Oh wow, that IS a TREE! Huge!
I'm a tree lover (without hugging)..they are so strong, powerful and still so beautiful.
I'd love to make visual journals but...I don't have time for everything :)
Have a relaxing weekend!

my blog is here - > BLOGitse

Awesome place with awesome trees and your captures are terrific!! Thanks for sharing the beauty! Enjoy your weekend!!

I'm inspired by your photos of these magnificent giants as well as by the story of the birthday gift you gave yourself!

I seldom use the word 'awesome'; it's overused by the media and advertisers, but these shots of the giants are definitely awesome! Thanks for sharing these; more coming, I hope.
BTW, age is mostly in our heads, except of course, when pains sparks a touch of reality to our brain! I'm old enough to be your older sister...he, he.

What a trip !!! I love the sequioas ! Have been to Yosemite, and Sequoia National Park a few times ... would love to go back again ....

how absolutely cool is that!!!! amazing. happy birthday coming up in october. thanks for sharing your "birthday adventure"

What a beautiful tree!